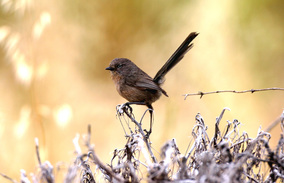 The Wrentit is a small songbird with a long tail, stubby straight beak, and is gray-brown color. Wrentits live in thickets along the Pacific Coast from Oregon through California to northern Baja California. They prefer to live in chaparral brush and coastal brushy thickets. Wrentit nests are made of coarse bark bound together with spider silk and a deep cup of fine bark, lined with fine fibers or even hair. The outside is commonly camouflaged with lichen. Wrentits eat insects primarily, but they will take berries if they can’t find insects. They do not migrate and can be found in the chaparral all year long. They are very common, but may be shy. They are among the most likely animals a visitor may encounter on his/her trip to the chaparral. Their song is very distinct and they are very vocal. An audio of one’s song can be found below. They are categorized as "Least Concern" on the IUCN Red List of Threatened Species. 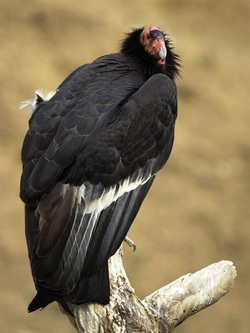 The California Condor is the largest species of land bird in North America. Its wingspan may reach nearly 10 feet and it weighs up to 14 kg. It is critically endangered; as of May 2012, only 226 condors were known to live in the wild. They are scavengers that feed on the corpses of other animals, usually large mammals. They are often found near cliffs or large trees, which they may use as nesting sites. It inhabits mountains of central and southern California  and northern Baja California. They hiss, growl, and grunt because they lack vocal chords. A recording of one can be found below. 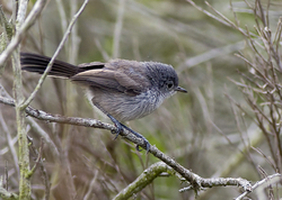 The California Gnatcatcher is a small bird around 4.5 inches long and weighs around 0.2 ounces. It has dark blue-gray feathers on its back and gray-white feathers on its underside. Their wings are brownish and its tail is mostly black with some white outer feathers. The males have a black cap during the summer, which they lose during the winter. They are insectivores and are non migratory; as a result, they can be found in the chaparral throughout the entire year. They  were listed as "Threatened" on the IUCN Red List of Threatened Species in 1993. The entire world's population of the California Gnatcatcher occurs in Baja California and coastal southern California. They thrive in coastal scrub habitats. Their calls can be found below. 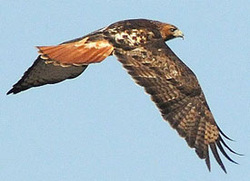 The red-tailed hawk can be seen circling above the chaparral looking for rodents and other prey to hunt. It is the most common hawk in North America. It is categorized as "Least Concern" on the IUCN Red List of Threatened Species. The head is dark and the body is usually light to dark brown. They are active during the day. They typically build their nests on elevated locations such as trees or telephone poles. A recording of one can be found below. 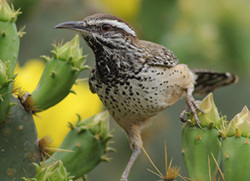 The cactus wren is the largest wren in the United States. They like to breed in chaparral scrub. They are permanent residents of the chaparral because they don't migrate. They mainly eat insects. They are of "Least Concern." They are known to attack the nests of other bird species. Its call can be found below. 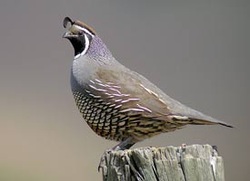 The California Quail is California's state bird. It is identified by its forward drooping head plume. They are common but unobtrusive and flee if humans come too close. They are of "Least Concern". Its main call can be found below.
Powered by